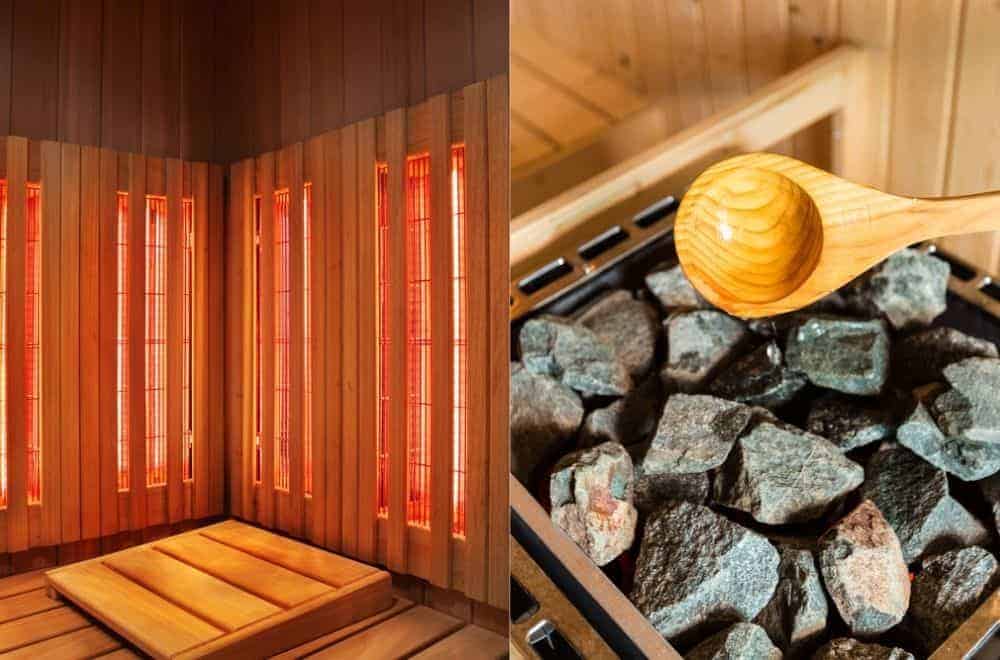 Few things are as invigorating as spending time sweating it out in a sauna, especially when followed by a dip in the cold pool and then repeating the cycle several times. And nowadays, increasing numbers of people are looking into installing one in their homes.

If you’re one of them, you’ll probably be aware that there are two main choices, the infrared version or the traditional one. So in this post, we look at infrared saunas vs traditional saunas to help you understand the differences so you can choose the right one for your needs.

If you want a preview of some of the stuff we’re going to be talking about, you can also check out this video before reading on.

What is a traditional sauna? 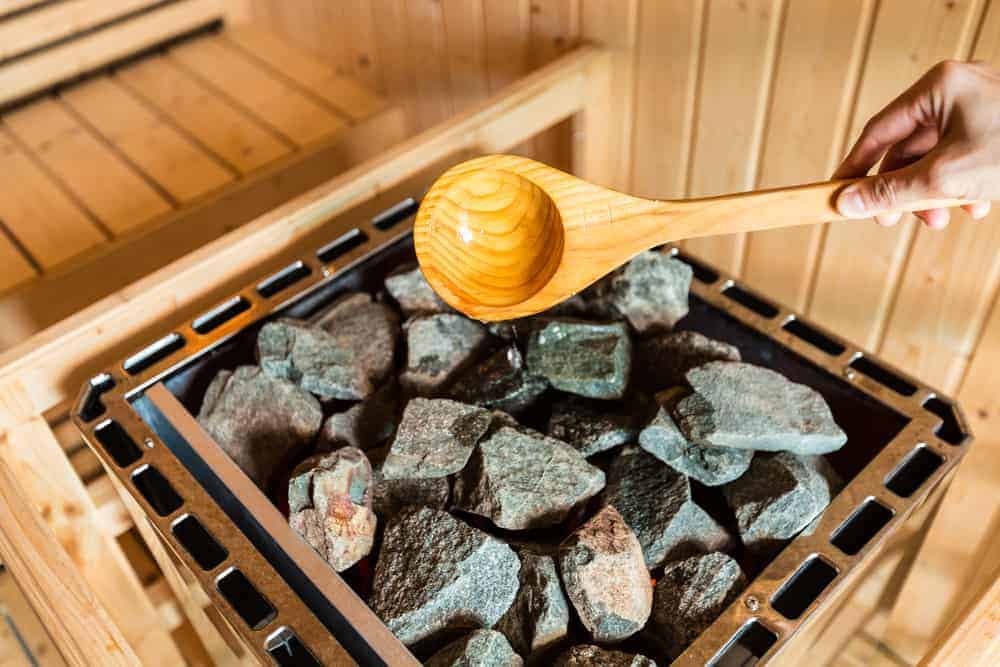 Saunas originated in Finland where, at first, they were primarily used as a way to warm up during cold Nordic winters.

However, from these beginnings, they gradually developed into a cherished social activity where people would sit in a heated room enjoying the benefits of the warmth and each other’s company.

Modern saunas are based on this model. The most traditional versions feature rocks that are heated over a wood fire, although nowadays the rocks are usually heated by electricity.

Sauna users can then throw water over the rocks to create steam, further increasing the temperature.

Despite this, traditional saunas are considered “dry” because there is always a vent to let steam escape. Although humidity inside can sometimes reach as high as 35%, it usually doesn’t go above 15%.

This allows temperatures to reach as high as 200°F, and users sit inside on wooden benches, sweating in the heat and enjoying all the supposed health benefits – which we’ll come to shortly.

What is an infrared sauna? 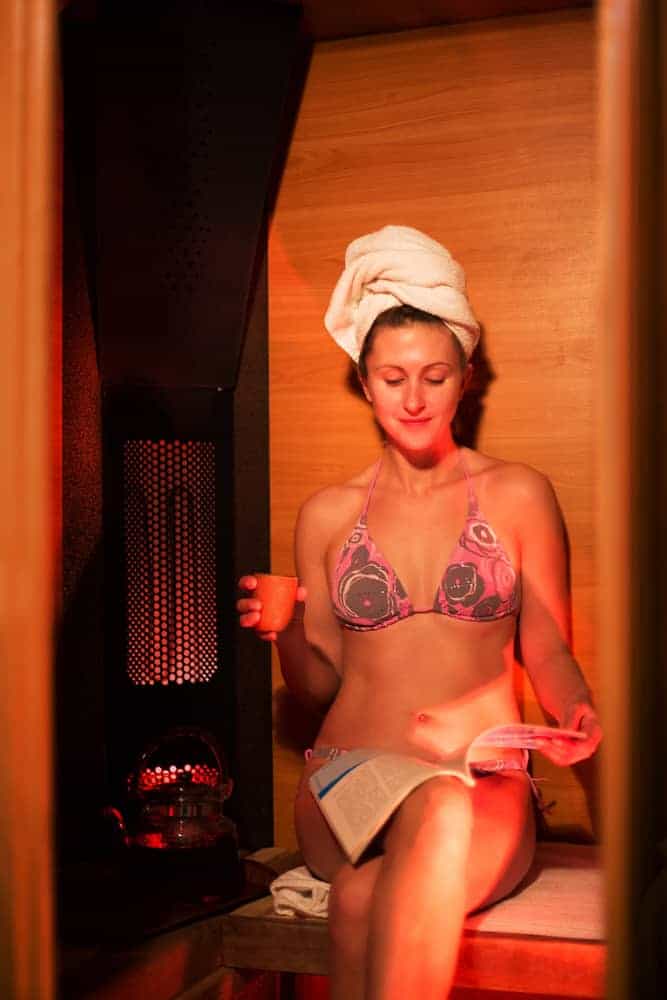 An infrared sauna, on the other hand, is a much more modern invention.

Inside an infrared sauna, the bather’s skin is heated directly by infrared radiation, rather than by the hot air in the sauna.

Since there is no steam in an infrared sauna, the humidity is much lower, in the region of only 5%. Since the skin is heated directly, the temperatures are also lower, reaching only around 120-140°F.

However, despite these differences, sitting in an infrared sauna has the same effect of raising the user’s body temperature and inducing sweat – and the supposed health benefits are also similar.

Are there any other types of sauna?

Several other installations are also sometimes called “saunas”. For example, a steam room is sometimes referred to as a “wet” sauna – this is where you sit in a sealed room and steam is piped in raising the temperature and elevating the humidity to nearly 100%.

Similarly, Turkish baths or hammams are also called “Turkish saunas”, although this term is merely descriptive and is not technically correct.

You may also hear people talking about their infrared sauna blanket. This is a kind of blanket – or perhaps more like a sleeping bag – that you get inside to have your body heated by infrared radiation, just like sitting in a full-sized infrared sauna.

However, for the rest of this post, we will stick to talking about traditional and infrared sit-in saunas only since that’s what concerns us here.

What are the benefits of using a sauna?

Saunas are part of an ancient Finnish tradition, and their health benefits have long been known, not least to the Finns.

In more recent times, science has started looking into these supposed benefits to confirm or refute them, and in many cases, it turns out the science backs up the claims.

For example, there is evidence that sauna use provides a whole range of benefits to the heart and circulatory system. For example, studies show that regular sauna users have a lower risk of heart problems such as cardiac arrest, coronary heart disease and cardiovascular disease.

Spending time in a sauna also increases circulation, giving you some of the same benefits of a moderate workout, and regular sauna use can also help lower blood pressure – although blood pressure may rise initially for new users.

Sitting in a sauna is also known to help with aches, pains and rheumatic conditions, and many athletes use saunas to help with recovery after training or competition.

Another major benefit of sauna use is its ability to help you relax and destress, and sauna users also commonly report improved sleep.

Other possible benefits include improved skin condition, possible strengthening of the immune system and even protection against dementia.

Most of the research to date has focused on traditional saunas, but since they work in similar ways by heating the body and inducing sweat, it is reasonable to assume that most of these health benefits can also be gained from infrared saunas too.

However, there are also some differences, which we’ll mention again below.

Traditional saunas and infrared saunas have many similarities, and they offer similar benefits, but what about the differences? Let’s look at these in a bit more detail now.

We’ve already touched on this, but it’s one of the main differences between the two so it’s worth highlighting again.

Traditional saunas are heated either by a wood fire or by electricity. This raises the heat of the air inside the sauna, which then raises the body temperature of anybody inside, causing them to sweat.

Some even claim that infrared radiation penetrates further into your body, provide extra health benefits, although these benefits have yet to be proven.

We also already mentioned the temperature difference – up to 200°F in a traditional sauna as opposed to around 120-140°F in an infrared sauna.

Both types induce sweating to a similar degree. However, since the temperature in an infrared sauna is lower, it makes the experience less intense.

As a result, you can stay in an infrared sauna longer – usually up to around 45 minutes compared to the 10-20 minutes you would normally spend inside a traditional sauna each time before taking a break.

Due to the way the two types of saunas are heated, the time it takes to heat up before it’s ready to use is different.

A traditional sauna needs to be started around 45 minutes before it reaches the correct temperature while an infrared version only requires 15 minutes.

This means you won’t have to wait as long with an infrared sauna – or at least you won’t need to worry about being organized and planning ahead each time you want to use it.

Generally speaking, both traditional and infrared saunas require little in the way of maintenance.

However, since the humidity level in a traditional sauna is higher, the moisture, coupled with the constant warm temperatures, can allow mold, mildew and other similar problems to develop.

This means you will need to make sure you keep it clean and disinfected to ensure it remains in perfect condition.

With infrared saunas, this is less of an issue since the humidity levels are much lower. However, you still sit inside and sweat, and this moisture can also allow mold and mildew to grow – so you’ll still need to make sure you keep it clean.

Both types of sauna are relatively inexpensive to run. This is because you only need to provide power when you’re using it, and when not in use, the sauna is left switched off – unlike a hot tub for example, which needs to be left on constantly.

However, infrared saunas tend to be more energy-efficient, and since they also take less time to warm up, they are less expensive to operate.

As a rough estimate, a traditional sauna may cost twice as much as an infrared sauna to run – but at the same time, since the costs are fairly low for either type, this is perhaps less of an issue than it might seem.

A big difference between traditional saunas and infrared saunas relates to installation and how much installation is likely to set you back.

If you want a traditional sauna, it will probably need to be custom made, and the materials also need to be of higher quality. This is because they need to be able to withstand higher temperatures and have a higher degree of resistance to mold and mildew.

Even after you take the materials into consideration, the work required is far more extensive, so you’re looking at a much higher labor bill.

Infrared saunas can be bought off the shelf, and you can install one quite easily with the help of a friend or two in just a couple of hours.

Although it’s not recommended to buy an inferior product, you can probably get away with spending a bit less on high-quality materials than if you are installing a traditional sauna, so when it comes to cost, infrared saunas come out the big winner.

Generally speaking, there is not so much difference between the benefits of traditional and infrared saunas. Both heat your body, causing you to sweat, both increase blood flow, providing benefits to the heart and circulation and both help with relaxation.

Most of the other benefits are also comparable, but a few, such as helping with respiratory ailments, boosting the immune system or helping prevent dementia, may only apply to traditional saunas.

The final major difference between the two types of sauna has to do with the experience.

Sitting in a dimly lit traditional sauna, possibly with friends or family and sharing some light conversation, is a moment to savor. There’s also a certain amount of history and ritual that adds to the overall mood, which makes it feel even more special.

Infrared saunas, conversely, are usually more functional. You go in mainly for the health benefits rather than the pleasure of the sauna itself, and sometimes music or other entertainment is even provided to keep you from getting bored.

Of course, that’s not to say that infrared saunas aren’t enjoyable or relaxing – it’s just that the whole experience of a traditional sauna has more to it, and it’s something many people prefer.

Before we finish, we also need to bust a couple of common myths because you can sometimes read claims about both types of sauna that are simply untrue but that are often repeated, usually by people trying to sell you a sauna.

First, neither type of sauna can help you with weight loss.

While you may weigh less after a sauna, this is due to the loss of water through sweating – but you aren’t increasing your metabolism and you aren’t burning any extra calories or fat.

Sorry – but if you want the benefits of exercising, you’ll have to go for a run or head to the gym!

Second, it is a commonly held belief that saunas are good for detoxification because they make you “sweat out” toxins through your skin. But again, this claim is false.

The function of sweating is to cool you down when you get too hot – but it has nothing to do with detoxication. Detoxification is mainly done by your liver and kidneys, and your skin plays no part in this.

This means that sitting in a sauna, whether traditional or infrared, will do nothing to cleanse your body of toxins since sweat is almost entirely made up of water.

So which should you go for? Both types of saunas are enjoyable to use and both have their associated advantages and disadvantages – and both offer many benefits for health.

In the end, it’s up to you – but if you are more interested in the health benefits alone and would rather save some money, infrared could be a good option.

However, if you don’t mind spending a bit more, and you prefer the history, ritual, social aspect and overall feel of a traditional sauna, that might be a better pick for you.