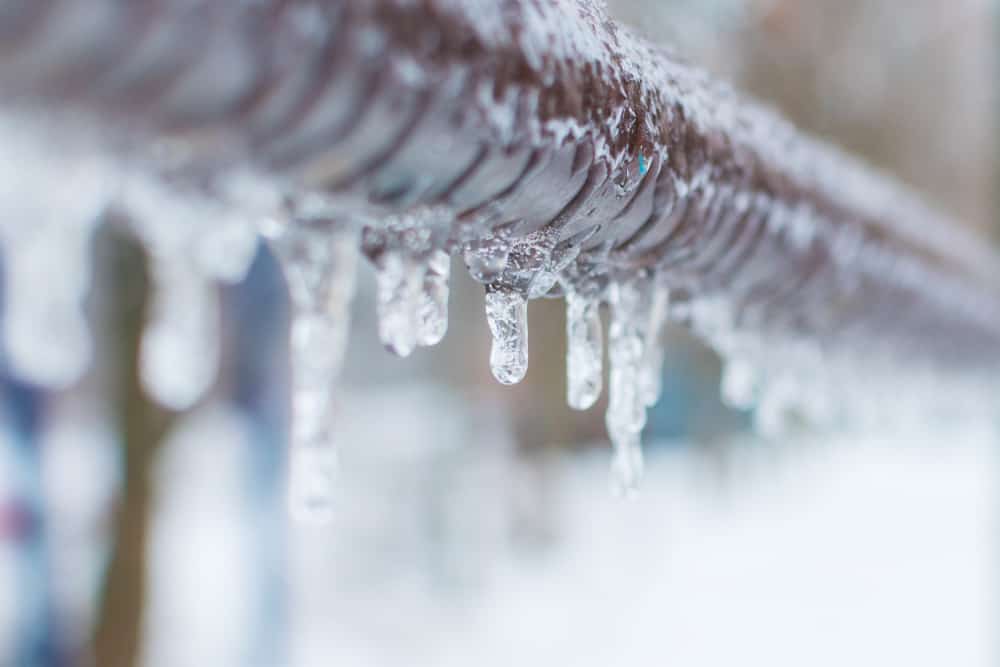 It’s a nightmare scenario for your plumbing system – the temperature outside drops and the water in your pipes freezes, leaving you with no running water. Then, when the pipes thaw, you find some of them have split, and the water comes pouring out, flooding your home.

This is not a rare occurrence either, and it can end up leaving you with an expensive repair bill too. So to make sure you don’t fall victim to this disastrous situation, in this post we discuss how to keep toilet pipes from freezing – as well as what to do if it happens.

What’s the deal with frozen pipes?

So what’s the deal with frozen toilet pipes? Why does it happen and why is it so damaging?

The answer lies in the fact that when water freezes, it expands. Then, when it does, your pipes can do nothing to contain the expanding water and so they burst under the extra pressure – just like the way a can of soda will burst if you put it in the freezer.

Inside most of your house, this is unlikely to happen because the heat that keeps you warm also keeps your pipes well above freezing point.

However, those pipes in unheated areas of your house can be exposed to colder temperatures and so are at risk of freezing. If you go away and leave the heating switched off, the pipes in the rest of your house will be at risk too.

It’s also a common problem. It’s estimated that in the US, 250,000 homes suffer burst pipes from freezing every year, making up between 11 and 20% of insurance claims. The resulting damage can then easily cost in the region of $5000-7000 to repair.

Of course, houses in northern states where the weather is colder are more at risk of frozen pipes.

At the same time, those in areas where temperatures don’t often drop low enough to freeze water in pipes are also at risk due to lack of preparedness – when unusually cold temperatures strike, freezing pipes become a widespread problem.

Water freezes at 32°F, so if the temperature outside is above that, you don’t need to worry – and even a temperature of 32° outside usually won’t freeze water in pipes because they are still partially protected from the outside temperature.

However, when temperatures outside reach 20°F or below, this should be considered a warning that your pipes are at risk of freezing and action needs to be taken.

Which pipes are most at risk?

When you are at home and your house is heated, the pipes inside aren’t normally at risk of freezing. However, unheated parts of your home that contain pipes are high-risk areas. These can include the following:

This means these are the areas you should monitor when temperatures begin to fall. 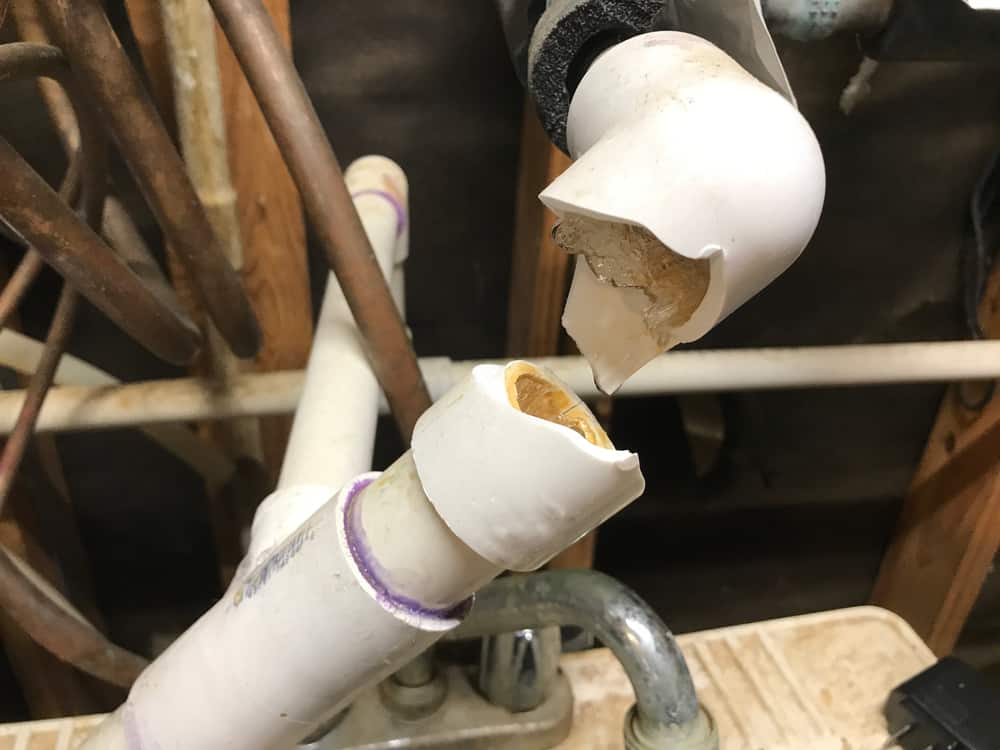 Whether you are talking about your toilet pipes or any other pipes in your home, there are several measures you can take to prevent them from freezing. Here are some suggestions for keeping your pipes free of ice.

The first thing you can do to prevent your pipes from freezing is to insulate them – it’s a good idea to insulate any pipes that run through high-risk parts of your home.

The simplest and cheapest way to do this is to use insulation foam. You can pick it up from any plumbing supplies store for as little as 50¢ per foot and is easy to install without the need for any specialist skills.

You just need to wrap it around your pipes and then fix it in place by applying duct tape at each end – just make sure the duct tape is suitable for higher temperatures if the pipes carry hot water.

Another option is pipe wrap, which may come in the form of foam, foam and foil, bubble film or rubber. This is more expensive than basic insulation foam, but it offers your pipes better protection.

A more advanced alternative to insulation is to install heating cables to your pipes.

Once in place, you just connect them to a power outlet. They then switch on automatically when the temperature drops below a certain temperature, guaranteeing your pipes will never freeze.

This is an option to consider if you live in a particularly high-risk area.

Since your garage is probably not heated, you should keep the doors closed. The temperature in your garage will naturally be slightly higher than the temperature outside, and keeping the door closed will help it retain this heat.

In particularly cold weather, you should open any cabinet doors in your kitchen and bathrooms. This will allow the heat from your house to reach the walls, keeping the pipes inside from freezing.

It might not be particularly convenient to leave your cabinets open all the time, but if the weather is likely to be particularly cold overnight, it’s something to consider. It’s also something that’s worth doing if you are planning on being away from home over winter.

It’s harder for flowing water to freeze, so opening your faucets just a little to allow them to drip will help prevent ice from forming.

Leaving a trickle of water running like this is something to consider if your area experiences a particularly cold snap – but it isn’t a viable long-term solution.

Turn up the thermostat in your home. This way, some of the extra heat will radiate into the colder parts of your home like the attic and will also heat the walls, keeping the pipes there from freezing.

When it comes to toilets, there’s a specific technique you can try to prepare them for winter, and that’s to flush the pipes through with plumber’s antifreeze.

This is a something that’s useful when your toilet and its pipes are likely to be exposed to freezing temperatures when it’s not in use. You can also do it overnight when cold temperatures are forecast, but it’s not worth doing when the toilet is in regular use.

To do it, turn off the water supply to your toilet and then flush it and hold the handle to let all the water flow out of the toilet tank.

Next, pour the antifreeze into the tank – make sure you use plumber’s antifreeze and not auto antifreeze since the type you use in your car is not suitable for your plumbing system.

Also, it’s highly advisable to wear goggles while you pour it in since antifreeze is extremely harmful if you get it in your eyes.

When the risk of freezing has passed, simply turn the water back on, fill the tank and flush the toilet to wash the antifreeze away and get the toilet ready for use again.

Tip: If you think there is a risk of the water pipes in the rest of your house freezing, you can also use antifreeze in your sinks and basins to protect them too.

Sometimes, despite all your best efforts, your pipes may still freeze – and it can also happen because if you forget to take precautions. So how can you tell if your pipes have frozen? Here are some of the tell-tale signs.

During cold weather, if you suddenly find you have no running water, it can be a clear indication that the water has frozen in your pipes.

If the water is not running from only one faucet, it means the pipe leading to that faucet is frozen – but if you have no running water anywhere, it means the water could be frozen where the supply line enters your house.

If you see your pipes and water lines bulging during cold weather, it probably means the water inside is frozen.

4. Frost on the pipes

If you notice that your pipes are frosted, it’s a clear sign that they have frozen.

Pipes that are very cold to the touch may be frozen – although cold pipes don’t necessarily mean the water is frozen inside.

If you notice bad smells coming up from your toilet or drain pipe, it may mean the water is frozen since the water is not flowing and so is not blocking the gas from coming back up.

Tip: You can test if your pipes are frozen by touching them. If they are very cold and frosted, you can further test them by tapping them gently with the handle of a screwdriver. They will feel solid and the sound will be different from non-frozen pipes.

How to unfreeze frozen pipes

Here are the steps to take if you find your pipes have frozen.

Check all the faucets in your home – you want to know which pipes still have running water and which have frozen.

If you only have one faucet with no running water, it may be possible to just turn off the valve on the pipe that feeds it. However, if the problem is affecting multiple fixtures, you should turn off the water to the whole house.

Open all the faucets attached to the affected pipes. This will allow the water to flow out once it starts to melt, and this will help limit the flooding if any of the pipes have burst.

As we mentioned above, you can identify frozen pipes by looking for frost, feeling them with your hand and tapping them with a screwdriver.

Heat the pipes gently. You can do this by placing a portable space heater near the pipes, by using a hair dryer, by using an electric heating pad or by wrapping the pipes in warm towels soaked in hot water.

Don’t heat the pipes too quickly or you risk damaging them – and they will also flood more quickly if they have burst. Heating them slowly will allow you to spot leaks before they become too serious and mitigate any potential damage.

Tip: When heating your pipes, avoid using a blow torch or a kerosene or propane heater – or anything else with an open flame. These will damage your pipes and also risk causing a fire.

Step 6. Pay attention to leaks and catch any water if you find any

If any pipes start leaking, catch the water, mop up any spills, dry the area thoroughly. If your pipes have burst, at this point, you need to contact a plumber.

If there are no leaks, you can turn the water back on and test your pipes. The water should now return to full pressure, in which case you have been lucky enough to escape without any serious damage to your plumbing.

Frozen toilet pipes are a problem that nobody wants to have to deal with. However, by taking preventative measures when the mercury begins to fall, you can avoid frozen pipes – as well as the costs associated with repairing the damage they can cause. 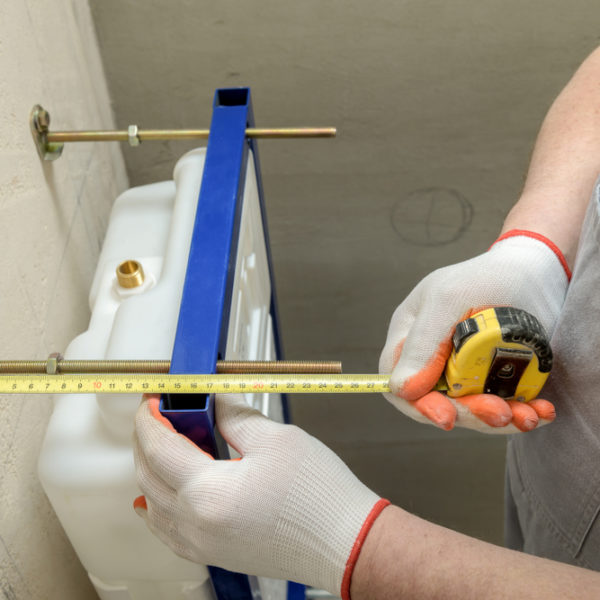 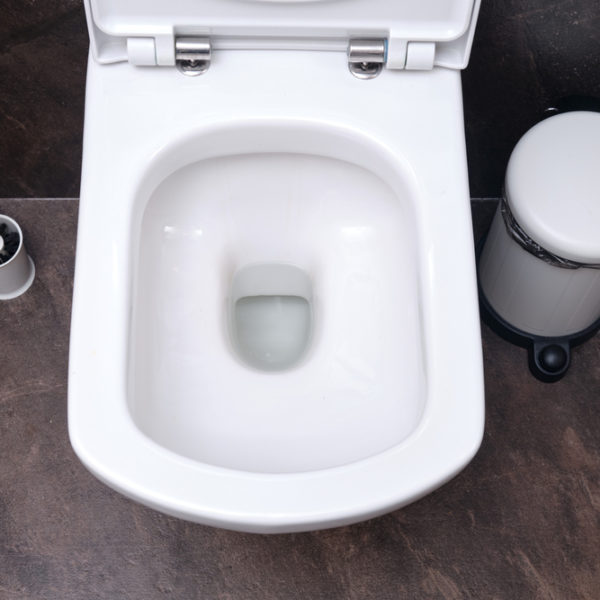 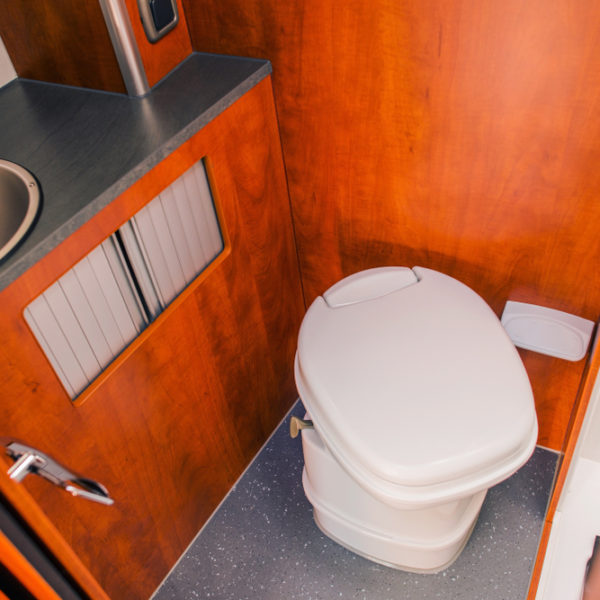 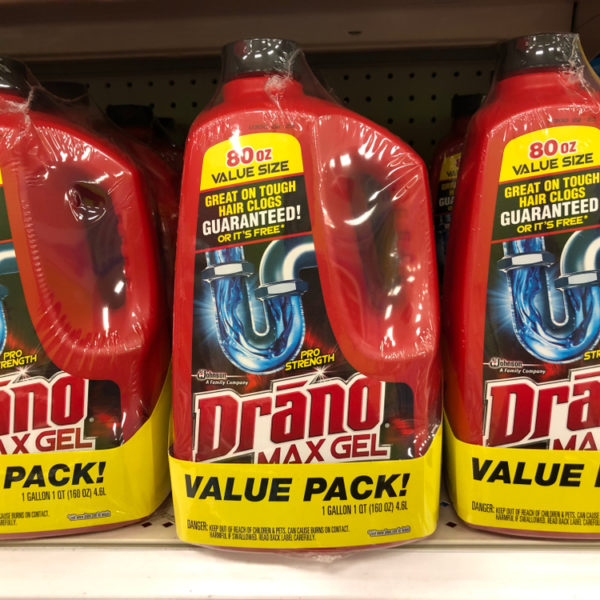 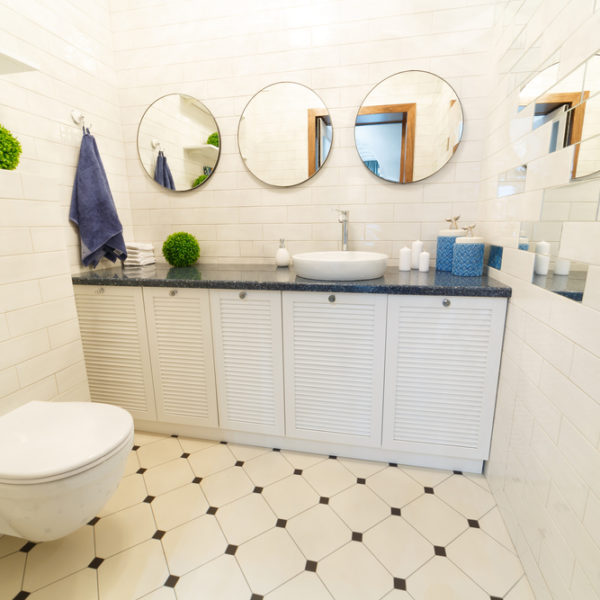 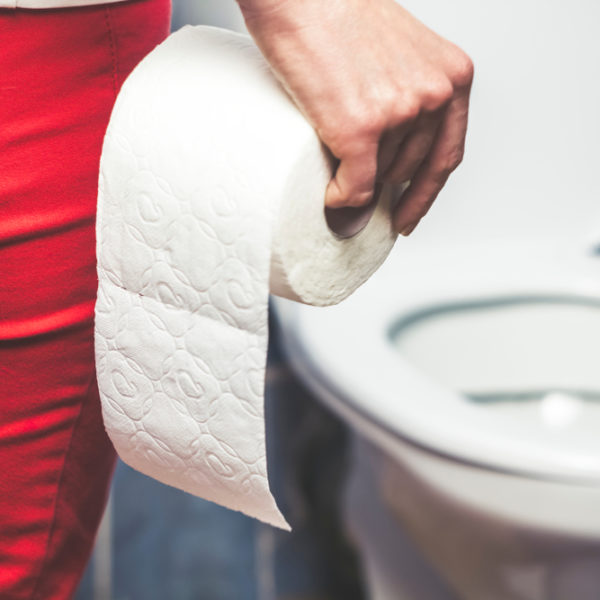 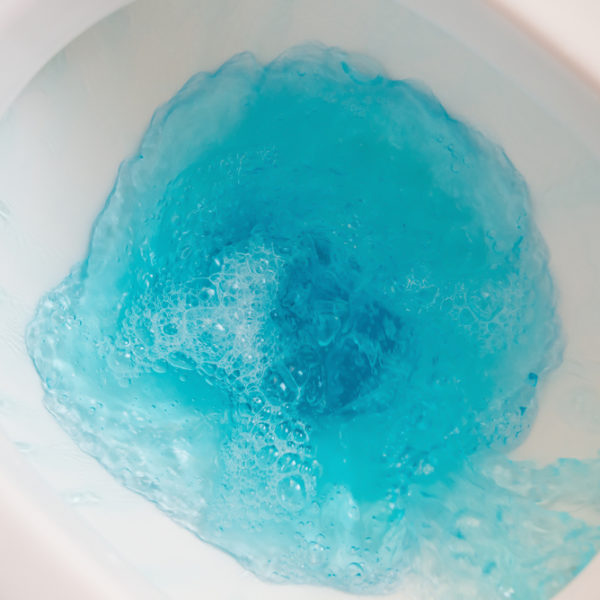