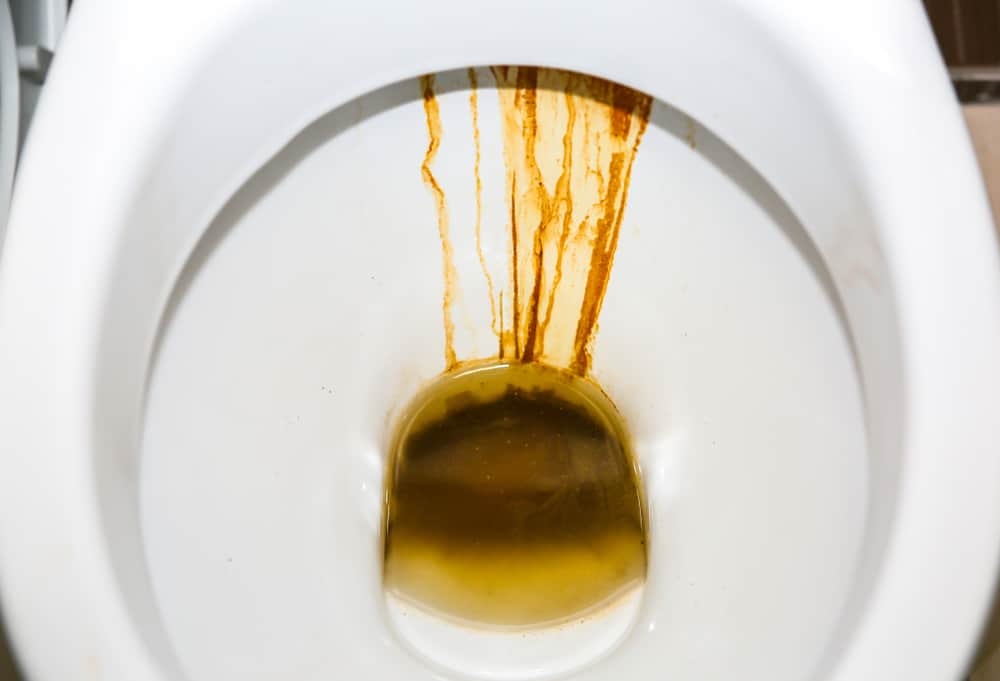 Everyone wants their toilet to look spotless and sparkling, but it’s almost inevitable that toilets eventually begin to develop nasty stains, and among the most unsightly can be rust stains.

If you see a rust stain, you may start to worry since they can look pretty hard to shift. However, they’re not really a big issue when you know what to do – and to help, in this post, we explain how to remove rust stains from toilets so you don’t have to panic.

How do you know if you have a rust stain?

First things first, how do you know if a stain is due to rust?

Well, the big giveaway is the color since they show up as a distinctive orange or brown that can best be described as…“rusty”.

They will usually appear in places where water runs since this is where any rust carried in the water is most likely to be deposited, causing a buildup.

They are less likely to form toilet rings around the water line – although that’s not to say this is impossible.

How do rust stains get into toilets? 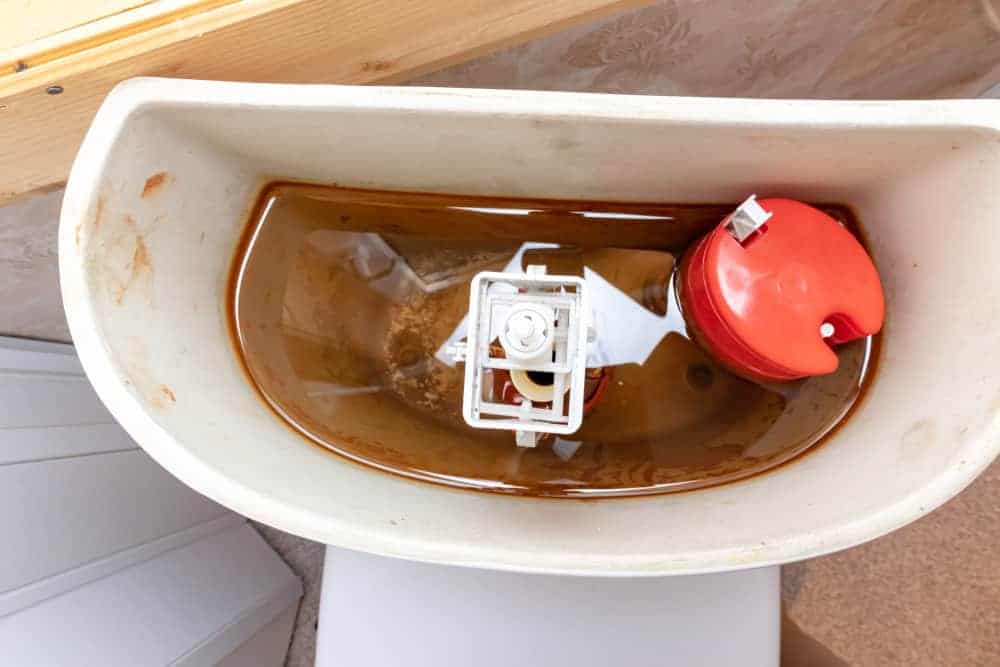 Rust stains are caused by rust being carried in the water, which usually means something somewhere in your system must have started oxidizing. It could be something in your toilet tank or it could be a pipe, and when it happens, it’s important to find out what’s causing it.

What else can be mistaken for a rust stain?

Having said that rust stains are usually easy to identify, there are other things that can cause similar marks in your toilet.

For example, a stain caused by a hard water mineral deposit can have a similar color and overall appearance, so this is something that might confuse you.

However, the good news is that most hard water stains from minerals as well as stains from mold or bacteria can be dealt with using similar cleaning agents and techniques.

This means even if you misinterpret the cause of your stain and you’re dealing with limescale or need to remove a tough calcium deposit, you should still be able to do it without the same cleaning products.

So now let’s look at the kind of thing you can use to do so.

What can you use to clean a rust stain on Toilets?

Although you can always turn to regular store-bought rust stain remover products, you might not want to spend money on them, or you just might not have them available when you need them.

In that case, there are several other options you can turn to – and here are some of the most popular.

Vinegar is the classic all-purpose cleaning solution thanks to the fact that it contains acetic acid. This can make short work of a whole range of stains, including rust stains, and it isn’t harmful to the environment either.

On the downside, it does have quite a pungent odor, but this quickly dissipates, so it’s hardly a major problem.

The best option is to use cleaning-grade white vinegar, but if you don’t have any, you can also use food-grade grape or cider vinegar.

Like vinegar, bicarbonate of soda, also known as baking soda, is another useful product to turn to. It quickly dissolves all kinds of stains, it doesn’t cost much and most people probably have some at home already.

For cleaning, don’t buy food-grade baking soda – go for the cleaning one instead since it’s much cheaper.

Lemon or lime juice contains citric acid, so like vinegar, it can be a useful – and all-natural cleaner to use on rust stains and more. You can also try adding essential oil, which will make it more effective and also give it an even more pleasant aroma.

Borax powder is more of a harsh chemical than bicarbonate of soda, but otherwise, it works in a similar way. You can either sprinkle it onto a stain or you can mix up a paste, as we’ll explain in a moment, and both techniques are highly effective at removing rust and other stains.

You might think it sounds a little gimmicky, but using Coke to remove stains really works. This is due to the mild acid it contains combined with the action of the bubbles.

If you don’t want to waste real Coca-Cola, you can use a generic cheap version – and it should work just as well.

Another option you can try is WD-40, which is surprisingly effective for removing rust stains. Simply spray it on, leave it to work, wipe it off and check to see if it’s worked. Most people find WD-40 works well.

How do you remove a rust stain from a toilet? 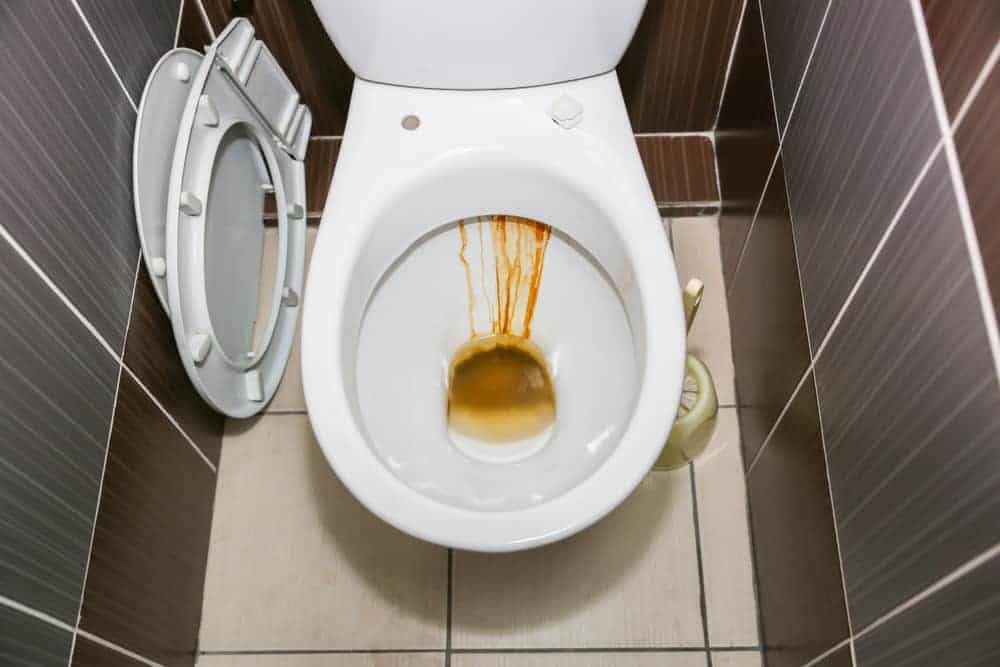 If the stains reach the water line, you will need to remove the water from the bowl first. You can do this simply by scooping it out with an old cup and then soaking up whatever’s left with an old towel.

Now let’s look at how to tackle those stubborn rust stains.

How to remove rust stain from a toilet with vinegar?

Step 1. Scrub the stains with the toilet brush

After emptying the bowl, give the rust stain a preliminary scrub with the toilet brush. This won’t remove all of the stain, but it will probably help get rid of the worst of it, which will make the rest of the operation a little easier.

Step 2. Spray the vinegar onto the stain and leave to work

Pour a cup of vinegar into the spray dispenser and use it to spray the vinegar generously onto the stain. Leave it there for at least half an hour or preferably longer to allow it to do its thing.

Take the toilet brush and give the stain another scrub. If the vinegar has done its job, you should now be able to scrub the stain off easily.

Step 4. Flush the toilet and inspect

Step 1. Scrub the stain with the toilet brush as above

As described in the method above, take the toilet brush and give the stain a scrub to see if you can get the worst of it off.

Step 2. Mix up a paste of bicarbonate of soda

Step 3. Use the spoon or spatula to apply it to the stain

Take your paste and apply it to the stain with the spoon or the spatula. Leave it on the stain for a minimum of half an hour – or more if you have the time.

Step 4. Scrub the paste off with the toilet brush

Once the paste has been left to do its work, take the toilet brush and give the stain another scrub. You should find it comes off easily, leaving you with a clean and fresh toilet.

These two methods explain the basic approaches to cleaning a stubborn stain from a toilet bowl. However, there are some other options for doing it using the other cleaning agents we listed above.

For example, you can simply substitute lemon juice and essential oil for the vinegar in Method 1 and spray that onto the stain instead. This technique should produce similar results.

Another possibility is to use vinegar instead of water to mix into a paste with the bicarbonate of soda. The paste made like this will be even more potent. Stick to the same 2:1 ratio.

Alternatively, you can use borax to mix into a paste with water – or for more extreme stains, use borax and vinegar to make a paste that should be capable of cleaning up just about anything.

You can also try using Coke, but this will work better for stains in the bottom of a toilet bowl. If you want to try, simply empty the water from the toilet bowl and fill it up with Coke instead.

Leave it to sit for half an hour or more, give the stained area a scrub with the toilet brush and then flush the toilet a couple of times to check your results.

Tips on How to remove rust stain from a toilet

Clean it off early

If you notice a rust stain or any other kind of stain appearing in your toilet, make sure you clean it off as quickly as possible.

This way it won’t have chance to become too encrusted, and it should be much easier to remove.

On the other hand, if you leave it too long, it will be much harder to deal with, so you will be saving yourself up a big job for later if you keep putting it off.

An even better idea is simply to make sure you clean your toilet regularly during your general household cleaning since this will stop stains from appearing altogether.

If you clean your toilet properly once a week, stains won’t have time to develop, so you won’t ever have to worry about cleaning off stubborn stains like encrusted rust.

Don’t scrub with an abrasive brush

If you notice a stubborn stain that’s particularly hard to remove, resist the temptation to attack it with an abrasive brush.

This might clean off the stain, but it will also damage your toilet bowl or toilet seat. If you scratch your toilet, it will be easier for stains to develop in the future, so again, you will just be giving yourself extra work – or expense – down the line.

The same is true of pumice stones. Sometimes you will see people recommending that you scrape stains from your toilet with a pumice stone.

However, these stones are also abrasive and can damage the porcelain or plastic of your toilet, so only use them as a last resort – if at all.

Get your pipes and tank checked out

If you notice rust stains developing, it could be an indication that something is wrong with your plumbing system. For example, it could mean that a pipe is rusting somewhere you can’t see it.

First, open the cistern and check the tank to see if anything is rusting in there. If it is, clean it out by emptying the tank and pouring in a bottle of vinegar. Leave it to work and then flush the toilet a couple of times to get rid of it all.

However, if the rust is not coming from your tank, you should consider calling out a plumber to check your pipes since a rusty pipe will eventually burst, and when that happens, you may end up paying a lot of money to get it fixed.

Use these cleaning ideas for other parts of your bathroom

Most of the cleaning ideas we’ve mentioned in this post don’t just work for rust but can also be applied to a range of other cleaning jobs in your bathroom – such as showers, sinks or tubs.

They are all highly effective methods, and none of them are expensive, so they could be worth trying out on other stubborn stains you need to remove.

Since rust stains can appear in a whole range of other places, such as in RVs, humidifiers, chrome fixtures and more, these techniques can be applied to deal with those problems too.

A simple enough job that shouldn’t have you panicking

If you find a rusty stain in your toilet, there’s no need to be alarmed since it should be quite easy to remove – you don’t need to start thinking about replacing your whole toilet just yet!

The best solution is to try a couple of the methods with the ingredients we’ve mentioned in this post to see which one works best for you – and we’re sure at least one of them will produce the shiny clean toilet you were hoping for. 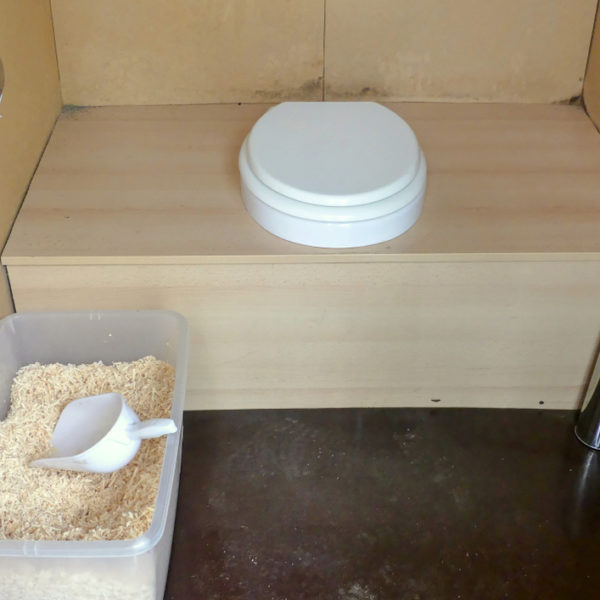 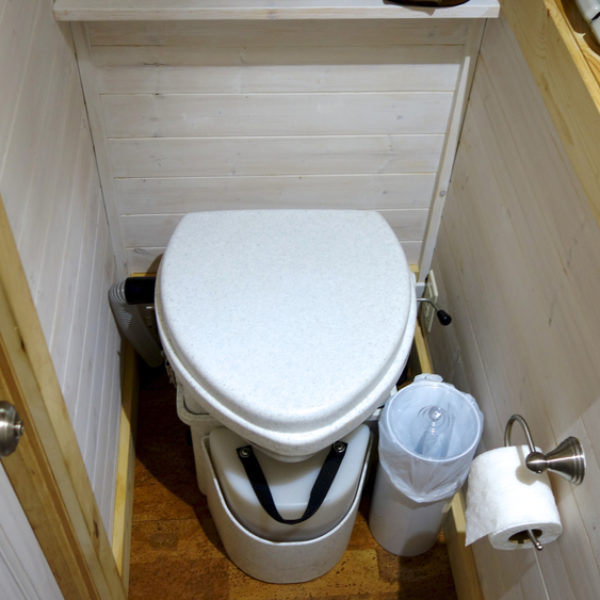 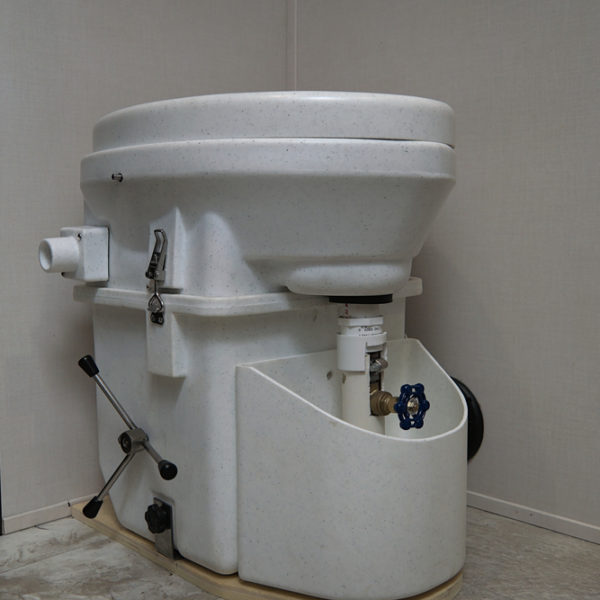 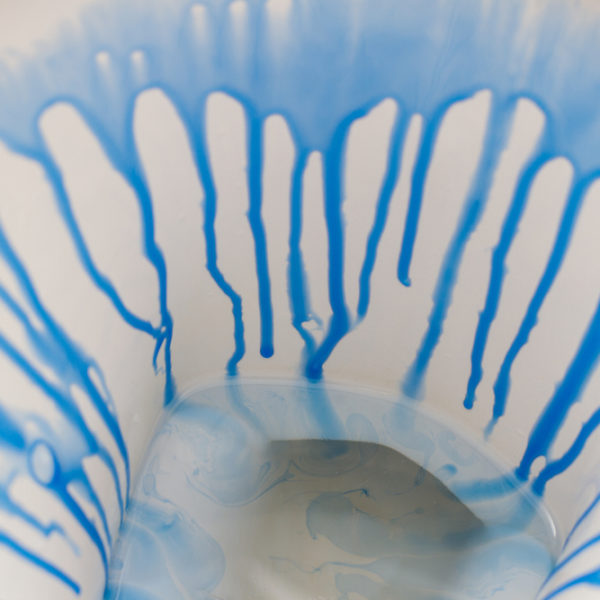 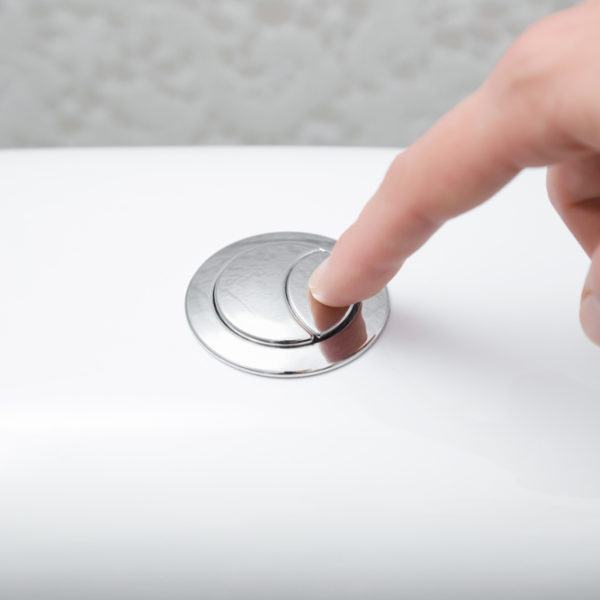 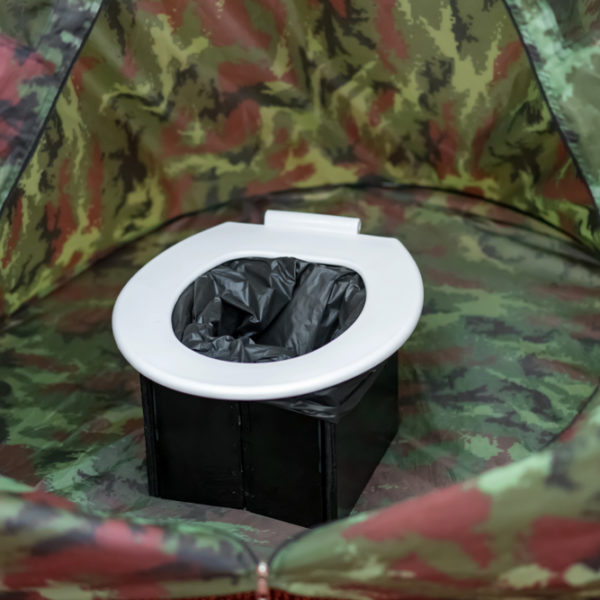 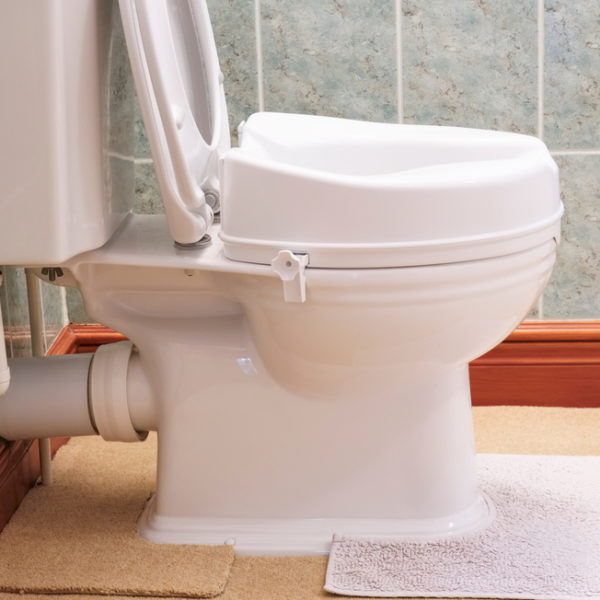